An Amateur Collector’s Cabinet of Curiosities

The charm of an old private collection 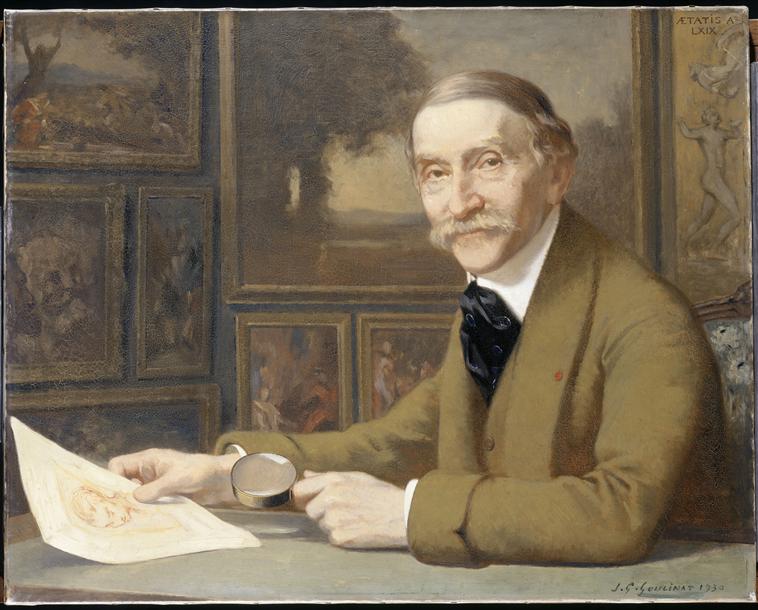 The charm of the Musée Magnin is to be found in the building itself. Although Jeanne an Maurice Magnin lived in Paris, where they built up their collection, it was at the Hôtel Lantin, in the mansion where they were born, that they chose to create the museum. Furniture, objets d'art and clocks would all add to the visitors' enjoyement, and preserve the lived in atmosphere of a former family home.

Maurice Magnin (1861-1939), puisne baron at the Cour des Comptes in Paris, cultivated his taste and furthered his understanding of art by regularly attending auctions at the Hôtel Drouot. Jean-Gabriel Goulinat, a painter and head of the Restoration Studio for the national museums, was one of his friends.

Jeanne Magnin (1855-1937) studied painting with the landscape artist Henri Harpignies. She left some small paintings, as well as a collection of painted glass that was presented at the 1889 Universal Exhibition. Self-taught in the history of art, she wrote two brochures, one on Romanticism and one on landscape painting, as well as the painting catalogues for museums in Besançon, Dole and Dijon. Her great knowledge of the collections in these museums certainly influenced the acquisitions she and her brother made.

Being relatively rich, but without excessive income, the Magnins deliberatly restricted the amount they were prepared to spend on acquisition. Over the course of fifty years they used their experience and knowledge at public auctions to acquire one thousand seven hundred paintings, drawings and small sculptures, some of them major works of art, as well as sketches, antique copies and pochades, all bequeathed to the State in 1939.

The dream of all collectors, to "unearth" a priceless work or a great name, explains the optimistic attributions that have now been dismissed (Poussin, Watteau, Fragonard, Prud'hon, etc). In fact, the collection prides itself on highly regarded artists, such as Crespi, known as Cerano, Dorigny, van Bijlert and van der Helst, who were less well known at the time.

One usual approach adopted by the Magnins was to purchase works that were outside or even against the tide of current fashion, while still aiming to form collections that could evoke the most important periods in an unbiased history of art. In the early 20th century, collectors who were interested in 17th century Florentine or 18th century Neapolitan painters were few and far between the works of Boucher de Bourges were almost unknown outside his home town or Rennes, while the names Le Sueur, La Hyre, Bourdon and Vignon did not have the same familiar ring as they do today, at a time when 17th century French painting was considered only in terms of Poussin, Dughet and Le Lorrain.

The Magnin's turned their financial constraints into a challenge: to reflect the great periods of western painting, not through the great names but rather the artists around them. So while there is not on Titian, there are two superb Carianis, no esque painting of the Entrée du Christ à Jerusalem [Christ's Entry into Jerusalem], nothing by Bronzino but a spectacular Susanna by his pupil Allori, no Philippe de Champaigne but two paintings by his nephew and pupil Jean-Baptiste. The visitor thus has the experience of discovering less well-known artists rather than the recognised works of genius.

Another unusual feature of the collection is that the masterpieces do not necessarly appear where you would expect them. Of the three most remarkable portraits in the collection, two are by artists still unknown: the Jeune Fille au collier de Jais [Young Girl in a jet necklace], painted around 1815, and the Portrait of a Man from the 1630s, while the third, the Jeune Fille peignant son jeune frère [Young Girl combing her little Brother's hair], was painted by Lefèbvre, particularly known for his portraits and engravings. The small landscapes by Girodet painted in Italy are extremely rare, and the almost monochrome view of Venice by the naturalist painter Bastien-Lepage is quite unexpected given his reputation for rural scenes.

Although they lived for half their lives in the 20th century, the Magnins, as collectors, were firmly anchored in the 19th century. We can tell this from their choice of lesser-known masters from this period, who had some success during their lifetime but today are mainly sought by amateur art collectors. This is clear from the way the Magnins' strictly separated their paintings into "schools", and chose to hang them close together throughout, is part of the charm of the visit.